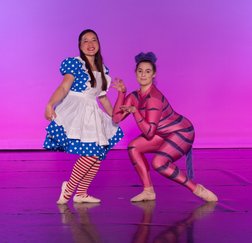 irzah Dove & Harley Thompson - Photo by William Roden / New Dawn Studios
Alice in Wonderland  is inspired by the beloved classic by Lewis Carroll, this fantastical, nonsensical tale of a little girl on a bizarre adventure has been enjoyed by generations of children and adults alike. Trailing after the White Rabbit, Alice tries to navigate through a world that is far from sane, and make sense of the cast of misfit characters she meets along the way. Alice learns to rely on her inner strength, stand up to evil, and triumph over the craziness that is Wonderland. 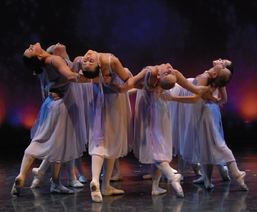 Photo by William Roden / New Dawn Studios
King Arthur's Tales is based on one of the great mythic figures of English literature. Dozens of legends and romantic images have grown up around him: the Knights of the Round Table, Merlin the wizard, and the Holy Grail, to name a few. According to the main Arthurian legends, the king wielded a magical sword, Excalibur; lived in a glorious kingdom called Camelot; was helped by the wizard Mordred; and was married to the beautiful Queen Guinevere (who in many legends falls
for Arthur’s knight Sir Lancelot). King Arthur’s Tale is a dance piece that uses a variety of Renaissance music from the 12th to the 17th centuries and text from the recorded story. This piece provides an introduction to this classic tale. He leads his followers to a deeper understanding of true love, a life of service to the betterment of humanity, and the struggle against evil. 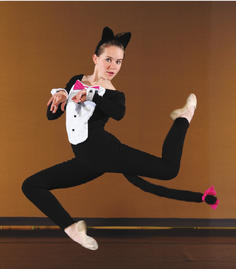 Marissa Hernadez; - photo by William Roden / New Dawn Studios
Peter And The Wolf  is unforgettable story told through music, invites children of all ages to embark on an adventure into the forest with Peter and his animal friends. This piece grabs the attention of young and old alike, using the familiar music and wonderful costumes to make magic on the stage. Each character in the story has a particular instrument and a musical theme, or leitmotif: Bird, flute; Duck, oboe;  Cat, clarinet; Grandfather, bassoon; Wolf, 3 horns;  Hunters, woodwind theme, with gunshots on timpani and bass drum; Peter, string instruments. 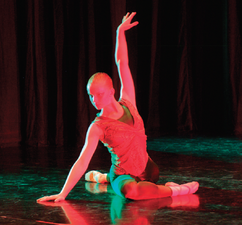 Kelsey Forbush - Photo by William Roden / New Dawn Studios
Elephants Child  is a classic story by Rudyard Kipling that teaches us to be true to our own inner nature and to follow our natural curiosities wherever they may lead. The music is also an important part of the piece. Bobby McFerrin uses his unique voice in a totally original way. His voice is unexpected and an expression of an artist who follows is own inner nature. Therefore, it is the perfect accompaniment for this delightful story. Much to the dismay of his parents, aunts, and uncles, the Elephant’s Child has a "satiable curiosity” that can’t be discouraged. This wonderful “Just So” story with an unforgettable cast of characters teaches life lessons about determination and adventure, and how sometimes our most challenging obstacles and harrowing experiences can help us develop inner strength and find hidden talent. 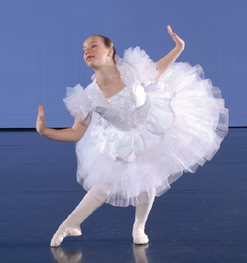 Alexa Stevens - Photo by William Roden / New Dawn Studios
Twas The Night Before Christmas is a SpectorDance holiday tradition.  This dance work is inspired by beloved holiday poem by Major Henry Livingston Jr. (1748-1828) with a selection of music by Andy Williams, Tchaikovsky, Ibert, Debussy, Saint Sein, John Zorn, and Mozart. It is about the excitement and pure joy of the holiday season from the child’s perspective. This dance work reminds us all to believe in the magic of life, the joy of giving, and the miracle of each step forward. Danced by children and adults together, to be enjoyed by the whole family!

Little Match Girl is a dance work inspired by Hans Christian Andersen’s poignant
story of a little girl on the eve of the New Year, whose vivid imagination along with
a book of matches carries her from a cold, dark world, to a happier place, where
there is warmth, peace, and love. Using a blend of traditional dance, classical music,
and storytelling, this piece will touch the heart and the soul.
The Lorax is a ballet inspired by Dr. Seuss's beloved book written in 1970. Long before "going green" was mainstream, Dr. Seuss's Lorax spoke for the trees and warned of the dangers of disrespecting the environment. In this rhyming tale, we meet the Once-ler, who discovers a valley of Truffula Trees and Brown Bar-ba-loots "frisking about in their Bar-ba-loot suits as they played in the shade and ate Truffula Fruits." We learn how the Once-ler and his family change the landscape and how to protect it for the future. Garland Thompson is the narrator.

Degas's Rainbow  is a ballet that pays homage to Edgar Degas, a French painter (1834-1917) who found a world at the ballet that excited his imagination. He painted in classrooms and from the wings, the orchestra pit, and the balcony of the magnificent Paris Opéra. He celebrated the inner lives of the young women who struggled to become accomplished ballerinas and to achieve a better life through dance.

Out of the Blue  is a playful ballet about the diversity of ocean life. Dive beneath the surface of the ocean to swim with sardines, crawl with crabs, frolic with sea otters, and float with jellies.

Winter Song is performance piece is a look at ways that various cultures celebrate the holiday season and the universal symbols of light and renewal.

Four Seasons is a dance piece inspired by Vivaldi’s timeless music about the beauty of each season of life.   This is an exuberant and colorful dance piece for the entire family.

Beatles Remembered is a new work inspired by the music of the Beatles, who changed not only rock and roll, but also the face of all music forever. This beloved group of musicians reflects the spirit of the 1960's and 70's with their timeless messages and melodies. This playful piece merges hip hop, jazz and ballet! Come a sing and dance along with SpectorDance.

The World of Beatrix Potter  is a ballet about a lonely girl with a vivid imagination who dreams of animals coming to life and becoming her friends. This ballet as an adaptation from the film entitled The Tales of Beatrix Potter choreographed by Sir Fredrick Ashton and danced by the Royal Ballet. This ballet pays homage to these charming characters who have become icons of childhood created by the eccentric 19th century British writer and painter, Beatrix Potter.

Les Sylphides is an early 20th century landmark ballet originally choreographed by Micheal Fokine. The 19th century ballets such as Sleeping Beauty, The Nutcracker, and Swan Land were evening length story ballets. Les Sylphides is considered the first ballet that has no plot about beautiful white-clad sylphs dancing in the moonlight with a poetic young man. Fokine was a brilliant innovator, choreographer and dance philosopher of his time. Choreography Amy Byington from the original choreography by Michel Fokine