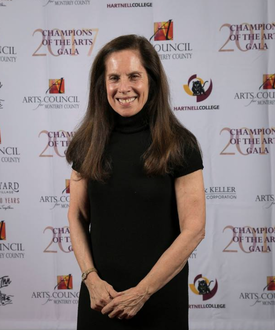 Fran Spector Atkins is the Artistic Director and Founder of SpectorDance, located in Marina, CA. SpectorDance's mission is to provide excellence in dance training and performance, accomplished by offering a wide variety of activities that connect diverse artists and audiences, bridge disciplines through collaboration, and celebrate the power of art to inform and inspire. SpectorDance’s vision is to create socially relevant art, expand community, ignite creativity, and fuel the human spirit. To carry out its mission, SpectorDance has a School, Company, SpectorDance On-Site, the Choreographers Showcase, and the Sadie Rose Residency Program. The company's repertoire focuses on contemporary dance that integrates music, spoken word and visual technology, and focuses on socially relevant topics.

Collaboration with outstanding non-arts organizations is key to every Company project. ​Examples include Common Ground, a collaboration with the United Farm Workers, about California agriculture; East West, a collaboration with Rancho Cielo about gang violence; Ocean our first collaboration with Monterey Bay Aquarium Research Institute (MBARI) about the state of the world ocean based on filmed interviews with renown ocean scientists, and Ocean Trilogy, a continued dance-science partnership between SpectorDance and MBARI, highlighting hopeful possibilities for ocean health from cutting-edge ocean science research.. The company was selected by The Arts Council for Monterey County as the Outstanding Arts Organization in Monterey County in January 2007 and was a national finalist for the Ovations TV award for Excellence in the Performing Arts.

Spector Atkin’s professional credits include a B. S. in Occupational Therapy from Boston University, an M.F.A. from Mills College in Dance and Choreography, and Certification in Laban Movement Analysis from the Laban/Bartenieff Institute of Movement Studies in NYC. Spector Atkins is an ABT® Certified Teacher, who has successfully completed the ABT® Teacher Training Intensive in Pre-Primary through Level 3 of the ABT® National Training Curriculum.

Spector Atkins began her professional career in New York City, where she performed with the Incredible Journey Dance Company and the Mariko Sanjo Dance Company. Since 1977, she has been an independent teacher and choreographer and directed studios in NYC, Cleveland, and Monterey. She has been invited to teach, choreograph, and perform throughout the United States and abroad. Some of her outstanding experiences include guest teaching and presenting her choreography at Oberlin College, Brown University, at the Smithsonian in Washington, D.C., the Aquarium of the Pacific in Long Beach, and in Denmark, Egypt, England, Israel, the Island of Guam, Taiwan, and Italy.  In Fall 2018, SpectorDance Company will perform at the New Victory Theater in Santa Barbara, and In Spring 2019, at Stanford University in Palo Alto and at Sunset Center in Carmel.

Amy Byington began her dance training (ballet, jazz, modern, character and tap) at the Royal Academy of Fine Arts in Houston, Texas. She has performed with the Clear Lake Metropolitan Ballet and Galveston Ballet, dancing various roles in The Nutcracker, Coppelia, Cinderella, The Sleeping Beauty, Swan Lake (Act II), Giselle and Don Quixote. Amy has studied under Leo Ahonen, Soli Arvola, Keith Cross, Luis Fuente, Myrta George, Lynette Mason, Richard Munro, and Beverly Williams; and has worked with choreographers Amalie Hunter and Olga Kostritsky. In 1994, Amy received a scholarship to study at the Joffery Ballet School and Broadway Dance Center in New York.  Amy came to SpectorDance in 2006 to share her love of dance by teaching ballet classes to all ages.  In 2009, she accepted the role of Assistant School Director, 2015 Director of the Youth Company, and in 2017 School Director.   Amy holds a B.S in Marine Science from Texas A&M University and a M.S in Marine Science from San Jose State University.   She is a senior analyst and research technician at the Marine Pollution Studies Laboratory at Moss Landing Maine Laboratories.